We are stoked to announce a new con that we will be at this June this time based around all things horror. It will be held by the Steel City Con guys at the Monroeville Convention Center and they are saying it will have over 30 horror icons.We will have more details closer to the event but I can tell you we will be having a few designs that will be available that weekend online and at the con so you can pick up something for the monster/ horror fan in your life (or just treat yourself, I won't judge). So in keeping with the theme I decided to do a Top 5 of my personal favorite movie monsters. I am not a huge horror fan but when it comes to the design and stories behind monsters I love them all. From the mythical infused fairies and demons like you get in Hellboy to the gigantic Kaiju from Pacific Rim I always am kind of rooting for the bad guy in a monster movie. So here are my top 5 as with any good list feel free to let me know who your favorites are cause with just doing 5 there will be a lot of quality bad mother-lovers that don't make the cut. 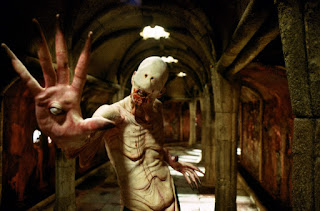 Starting me off at number 5 is the Pale Man from Pan's Labyrinth but let's be honest if you have ever seen a Guillermo Del Toro movie you know just about anything he has put on screen deserves a spot. He has a love of monsters that is unmatched it seems but this combination between his vision and Doug Jones portrayal stands out to anyone who has seen it. It starts so simple as the seemingly blind ghoul is enjoying a nice nap until a few grapes are stolen from his table. He then picks up his eyes off a platter and puts them into the sockets in his hands. The chase is slow but he shows why you shouldn't steal from him and while his time on screen is short it is one of the most memorable creatures from Del Toro. 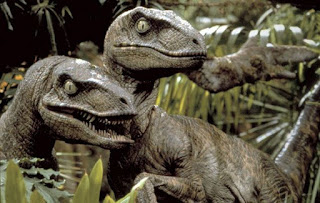 Coming in next at the 4th spot for me are the "clever girls" from Jurassic Park. My love of dinosaurs is right up there with my love of sharks (oh hey it's Freddy Foreshadow..)in that I started young and still am a big fan. The T-Rex may have the big moments like the classic toilet death but these were the ones I was more afraid of as a kid. All through the movie the Raptors were not only vicious but much more intelligent than you want a 5 foot leaping meat eating dino that is hunting you to be. The kitchen scene with the kids was as stressful as anything in the OG Jurassic Park. I know they became a SWAT team in Jurassic World but even Chris Pratt couldn't keep them in line and if Burt Macklin can't control them we all need to look out. 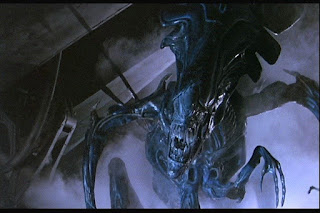 Taking the number 3 spot for me are the xenomorphs from the Aliens franchise. They are not only truly terrifying in the way they stalk their prey and use them as hosts to create more but they do it just to do it. They are a hive minded species who just want to kill and multiply. With acid blood, spiked tails, a teeny little mouth inside a huge mouth, and their Spider-man wall climbing there isn't much these guys cant do. To top it all off they have one of the most iconic and purely rad designs of any monster. Special nod to the facehuggers too. I would explain why they at least deserve a shout out but come on you have seen them right? Yea, case closed. 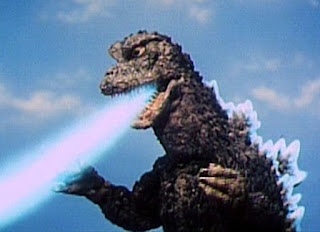 Number 2 is the daddy of them all for me. There are a few versions of Godzilla with varying degrees of success but to me the original is the man. I remember seeing the old black and white Godzilla movies as a kid and I was hooked. I had a hard green plastic toy that didn't bend or have any articulation but I loved that guy cause he could stomp the hell out of some Hot Wheels. Kaiju movies are some of my favorites and I am very pumped to see my man do battle with Kong in the near future but I will always have a place for the rubber suit as it sends a TKO to Tokyo. 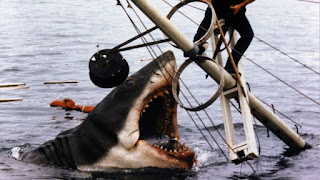 I love Jaws. This is one of those movies I have seen so many times that quotes from it seep out into my day to day life. I have read the book, (which you can skip trust me. Normally the book is at least as good as the movie if not better but Jaws is like 90% about a bad marriage with a shark popping up at the end.) I have watched the Inside Jaws: Filmumentary which is awesome and I highly suggest it if you are a fan, and I will buy all kinds of Jaws merch cause I can't not buy it come on. There isn't much I can say about Jaws that hasn't been said. The way they shot it seems perfect to add to the fear of not being able to see the shark until the climax and while we now know that was more forced because of the problems with Bruce (the shark was named Bruce after Steven Spielberg's lawyer) rather than a choice it helps the movie hold up even now. It is a masterpiece of building tension that can be watched again and again and you will never get sick of it. The sequels slowly ruined what was amazing about Jaws but they have their place cause sometimes you need a train wreck, Jaws 3D, to let you know how good the first was.

So there are my picks now let me know yours. Leave a comment or hit us up on instagram, twitter, and on facebook. We will keep you in the loop with details on the horror con in June as we get closer and don't forget to come see us at the Steel City Con on April 7-9. As always you can check us out at Shirtnado.net to pick up all the finest in rad ass shirts and all your Funko Pop needs. As a special treat cause we love you we put up 2 of our horror shirts online early. You can pick up our JAWS tee and Camp Crystal Lake shirt at shirtnado.net.